Anganwadi workers have been asking better pay for two years.

“We are getting the same amount of salaries, with a namesake raise here and there for the past one decade. Running our homes in the same meagre salary, fighting the inflation and ever-increasing cost of living have become a huge task for us,” Sangeeta Kamble, a Mumbai based Anganwadi Sevika (Nursery school teacher) expressed as she spoke with yet another journalist in the hope of making her voice heard.

With total apathy from the politicians and government officials and irregular distribution of the funds amongst the Central and State governments, the plight of the Sevikas and Madatnis (Helpers) at the Anganwadi (Government-run nursery schools) across the state continues to be quite the same around two years after they began their protests against the unjust treatment given to them.

In many other states like Telangana, Andhra Pradesh, Haryana, Kerala, Delhi, Madhya Pradesh, the monthly remuneration of the Sevikas is now above Rs. 10,000, while that of the Helpers is between Rs. 5,000-7,000. However, in Maharashtra, the salary of a Sevika remains to be around Rs. 7,000, while the Helpers get the hardly around Rs. 4,000 per month.

“The Anganwadi recruitments are supposed to give priority to appointing the women who are widows, differently-abled, single mothers, etc. as a means to empower them. How does the government expect them to work without salaries for months at a time, and take care of their families?,” Sangeeta Kamble, a Mumbai-based Anganwadi Sevika who is also a part of the protest questioned.

While the government often shrugged off the demands for higher remuneration stating that these are part-time jobs, in reality, the employees have a lot more to do then teach a bunch of toddlers. A majority of all the government schemes that are run in the villages, the responsibilities of the mid-day meals, local surveys, fall upon the Anganwadi Sevika in that particular village.

“Even if we do not consider these extra administrative responsibilities thrusted upon us, we still have to take care of the children from around 11 am to 1:30 pm everyday. It is practically not possible to get another part-time job in the second half of the day,” Kamble added. 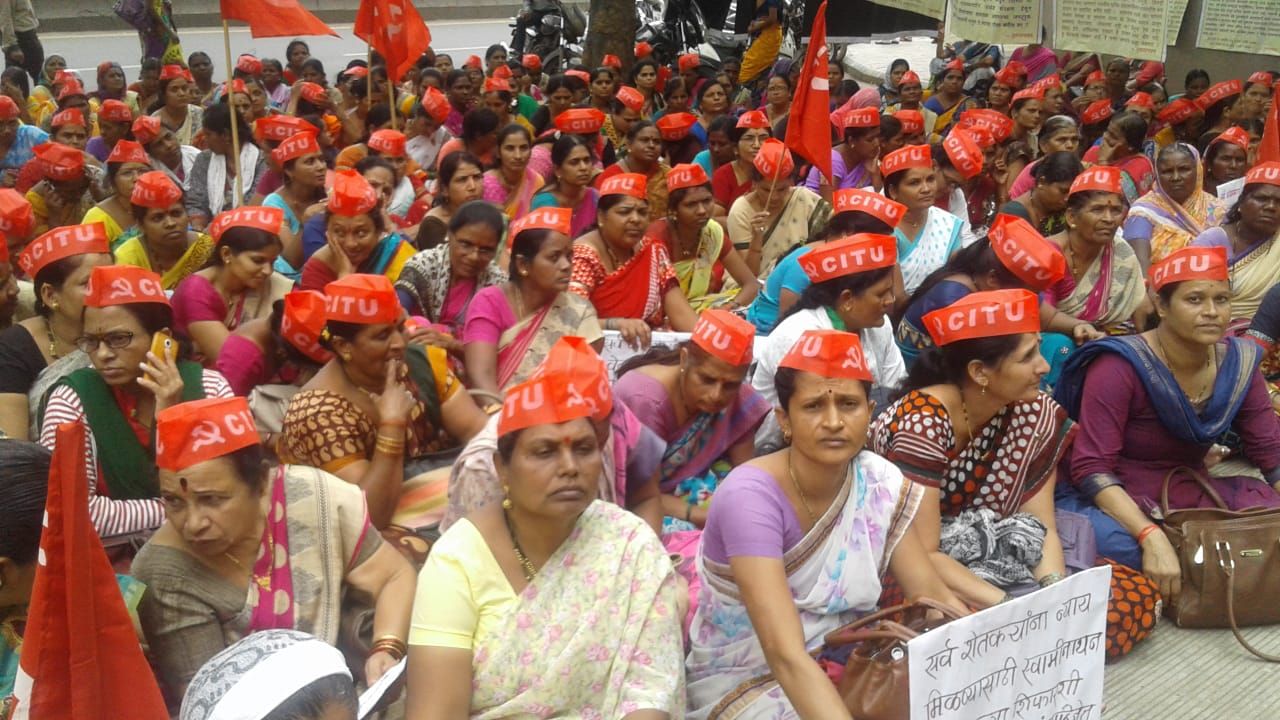 She further added that the ratio of funds distribution between the Centre and the State governments, which changed after 2014 has added to the misery.

“Earlier, the Centre had 90 percent share in the funds provided to the Anganwadis, while the remaining 10 percent was added by the State. Since 2014, the ratio has been changed to 60:40, and since then the issues have truly began. In the first two years, the situation was so grave that the employees did not receive salaries for around six to eight months at stretch due to lack of funds,” Shamim added.

Even now while the Central Government has approved a raise of Rs 1,500 in the remuneration of the Anganwadi Sevikas, it is still pending as 40 percent of this amount has to be paid by the State.

“The Central Government will give its share of Rs. 900 only when the State Government releases the notification approving the release of the rest of the amount, that is Rs 600. While they have not taken any steps for the same in the present Assembly session, now the issue might remain pending until the next session, which might again be delayed due to the upcoming elections,” Shamim added.

As their fight for the livelihood continues, the Anganwadi employees will be participating in the nationwide strike of the rural and urban working class on January 8 and 9. While the government has not yet responded to the Association’s notice of strike, if nothing is achieved soon, the Anganwadi Sevikas and Helpers have planned to launch into another protest on February 11, 12 and 13.

As these ‘empowered’ women make their way to their Anganwadis each morning with disappointment and despair in their hearts, the future of the happy and cheerful Anganwadis that give the village toddlers a chance at playful learning and nourished upbringing appears more and more bleak.