Deepak Takle is a young farmer from the Rohilagad village in the Ambad Tehsil of Jalna. Wearing a pink T-shirt and a pair of casual jeans, he is sitting on a swing, made from a repurposed old rusted iron cot hanging by two ropes from a Neem tree near a shed to keep his four cattle including two oxen, and a cow. 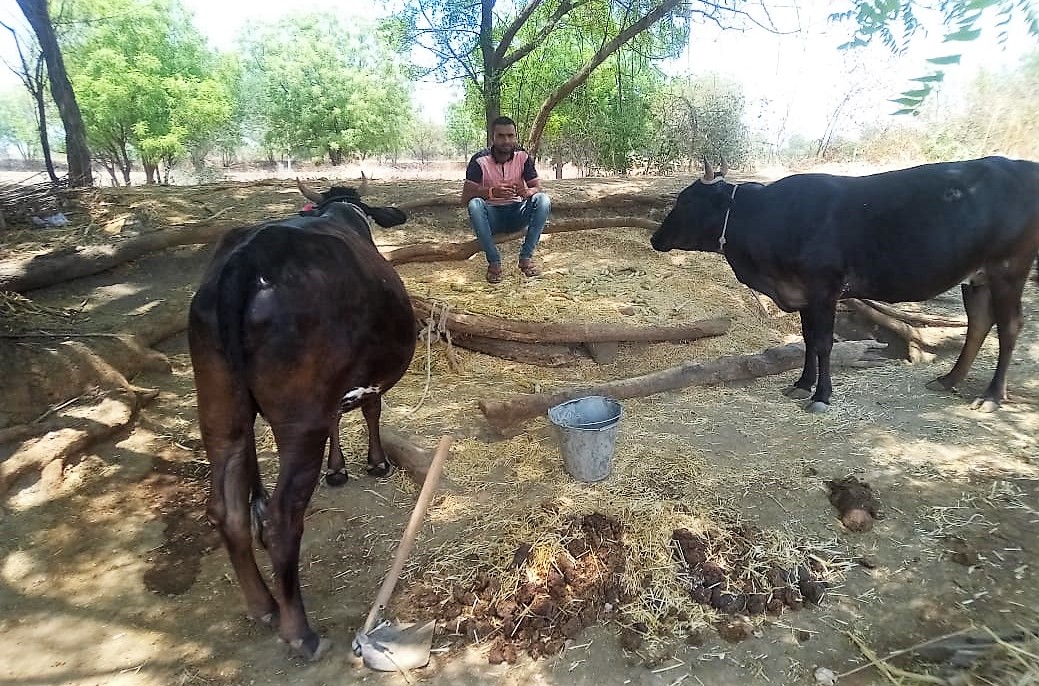 The dust of the Loksabha election campaigns has settled. Speculations are lingering in the air about who will be the winners and losers, but the farmers and villagers in the middle of a drought region in Maharashtra are facing a severe water scarcity and a major agrarian crisis.

“We get water supply from wells which are acquired by the gram panchayat, just twice a month. All villagers have to walk almost 4 kilometers to fetch water from the already deepened wells as the bore hand-pumps have dried up too. Tankers reach our neighbouring villages like Kingaon, Bhaigav Lonar and others but not in ours,” says, Deepak

As per the data released by the State Water Resources Department on Monday, April 22, 2019, overall, 3,267 dams in Maharashtra have 20.94 percent live storage (33.76 percent storage on the same day last year).

Nearly 71 percent of the state shows a drop of more than a meter in groundwater level in September in 2018, as compared to a five-year average as per the latest study conducted by the state’s Groundwater Survey and Development Agency (GSDA).

“This is also the marriage season. Like every year, marriages are common during summers, as all are free from the farming chores. But this water scarcity is burning a deep hole in the pockets of the bride’s father who has to arrange all the expenses of the marriage and ensure there is at least water for the guests, food preparations and what not,” says Narayan Takle. Managing his newly worn turban on the head he adds saying, “You are standing in the same region which used to produce sweet lime which used to be sent to Jalna and other markets. Our village was noted for this crop. Today, our villagers have to order purified water containers for marriages and usually have to walk kilometers for a single pot of water.” 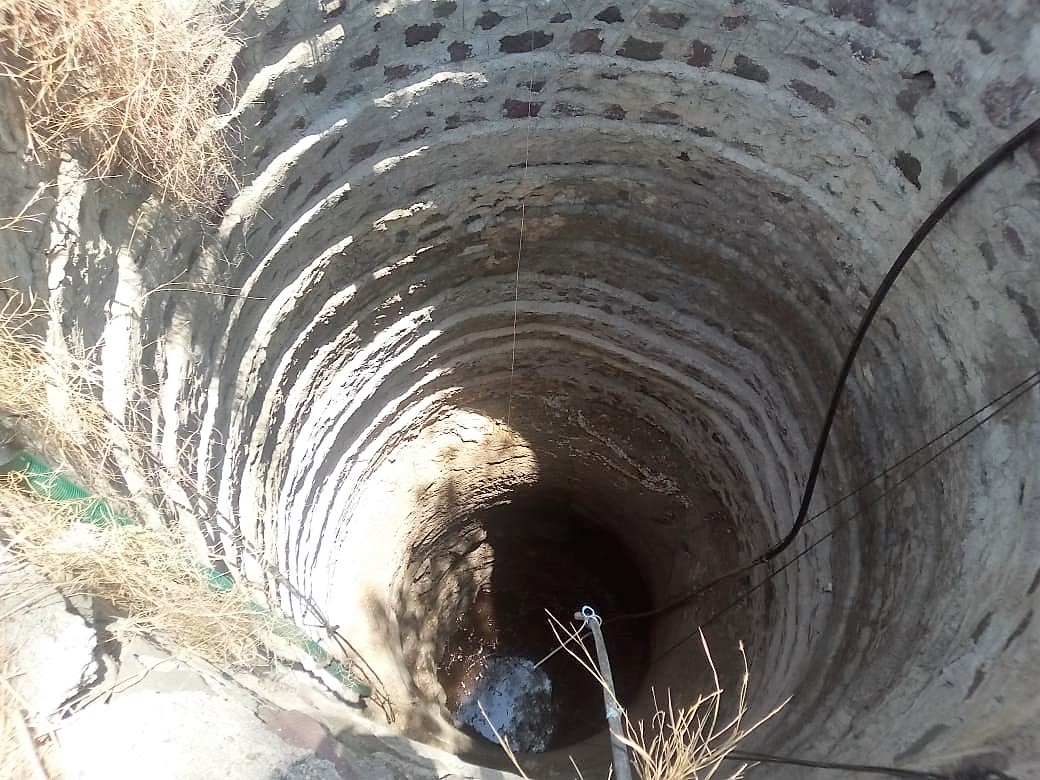 All villagers from around Rohilagad are facing water scarcity, which means that half of the time in a day is invested in getting a pot of water form kilometers away. The district administration is facing the challenge to cater to drinking water for villages, with the supply of water tankers depending on private borewells and wells in this region.

“The issues faced by farmers here are not limited to get a sip of water, but the entire state and especially Marathwada, here people are facing distress. They have no money to pay back the Savkar (local private money lender who charges hefty interest rates).

“Not one of the election campaigns of any political party spoke of the farmers and their issues. All were shot in the air. Local people are innocent, they don’t understand politics. Most of the farmers have not received any kind of Minimum Support Income announced by the Modi government and neither the money under the crop insurance scheme,” says, Vaijnath, a BA graduate student from the village.

Most of the farmers in Marathwada, are familiar with the scheme. Prime minister Narendra Modi’s Pradhan Mantri Kisan Samman Nidhi, a scheme under which the small and marginal farmers who have less than 2 hectares of land-holding will get up to 6000 per year as Minimum Support Income. The initiative was announced during the 2019 interim budget of India on February 1, 2019.

Deepak Takle owns 1.75-acres of land. He has not received the Rs.2000 amount promised under Pradhan Mantri Kisan Samman Nidhi. He had applied for the crop insurance scheme and paid Rs. 3000 to secure his crop. What Deepak has received as of now is Rupees 2420 rupees for the loss he faced in the Bajra crop in his farm last year.

“They say our generation is not interested in farming. You tell me the calculation. I have paid 3000 for the crop insurance and I have received 2420 Rupees. What kind of a business is this?” Deepak says.

Deepak had applied for the Mudra loan four months back at the Union Bank here at their local branch. What he has received as an explanation of his application was that the bank was facing a staff crunch and his application could not be processed further.

Shrikrishana Sagade from Ganeshpur village near Selu Tahsil in Parbhani district, is a Bachelor of Computer Applications graduate. “Unemployment is the bigger issue youths are facing here. Most of the youngsters of my age have migrated to Aurangabad and Pune for employment. More than 10 families in my villages have migrated for any odd jobs that they might find in Pune. They prefer guarding the bungalows of the rich in the cities instead of farming.”

Each year, after the end of the farming season, farmers migrating to cities like Aurangabad and Pune are common phenomena everywhere.  National Rural Employment Guarantee Act 2005, is a social security measure that aims to guarantee the 'right to work', but is a different reality on the ground altogether. On April 1, 2008, Jalna district was included under the scheme to guarantee the employment for villagers.

“There is a huge demand for work from every village, but there are very few sites where any work is going on. The labourer who is seeking employment in the village is nothing but a small land-holding farmer. If we fail to give them employment, we are leaving them to commit suicide.” Says Maroti Khandare.

Talking about the ground reality of MNREGA, he adds saying, “Work is being stalled by the local lobby of politicians and the government officers that are active in making this work done by machines. They have made every attempt to stop this scheme. In Amba village near Partur, recently MNREGA work was resumed worth rupees 8 Lakhs where around 500 employees were present every day for work. But the work lasted only for 8 days. People need work but it is not being provided under the scheme.”

What Mr. Khandare accused is that the local lobby that prevents the manual work done labors under the scheme. Villagers, with the help of local revenue officers, show fabricated reports saying there is no need for employment or shown a very negligible need of employment.

Datta Raosaheb Dhekane from Daithna Budruk village near Partur tehsil owns a 12-acre land but he is actively looking for employment under MNREGA scheme. This is one of the examples of how big farmers in the region extremely need employment.

On April 10, one Mr. Khandare from Maharashtra Rajya Majdoor Union Lal Bawata led an agitation before the divisional commissioner of Aurangabad to intervene in the matter and resume the MNERGA work in every village.

As per the report by Skymet Weather Services, it is estimated that India’s June-September monsoon, which delivers more than 70 percent of the country’s annual rainfall is likely to be below normal this year as the El Nino weather pattern may impact rain.

“We don’t know how we would survive before the rainy season starts. We have just received the monsoon of false promises during the election campaign of Loksabha election. Nobody talked of water scarcity, unemployment, and farmers,” says Narayan Takle, adding, "We have an extreme need for water tankers for villagers and fodder camps for our cattle, employment for people. The government has to take care of us. That’s whom we voted for.”

As he tugs on the rope tied to his cow, a feeble smile flashed on his face for a brief moment. However, the dust-colored sky, empty faces of the farmers, thorny bushes, plowed soil, cattle and stray dogs witnessed the lingering sunset in Rohilagad village. 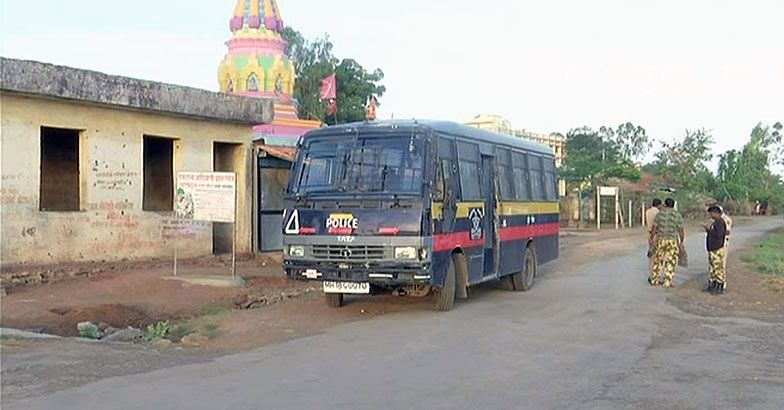