News Dabba 10 June: 5 stories across the web for a balanced news diet

Anushka Vani brings you the daily updates that the internet is talking about through various news websites. Here's a glance through some of the National and International news updates, from protests in several Indian cities over Prophet remarks, Trump being accused of instigating Capitol Riot by investigating committee, Rajya Sabha elections, to Thailand after legalising cannabis.

Massive protests erupted across the country including in Delhi, Ranchi and some cities in UP on Friday over remarks by suspended BJP spokesperson Nupur Sharma and her former colleague Naveen Jindal, NDTV reported. The news covers developments in the story over the day, with updates from different cities. The demonstrations in Delhi took place outside the Jama Masjid after the Friday prayers. The protesters demanded the arrest of Nupur Sharma and dispersed after about an hour. Read the full report on NDTV.

A congressional panel investigating last year's mob assault on the US Capitol laid out its case Thursday, accusing former US president Donald Trump of orchestrating last year's Capitol riot in an "attempted coup", BBC reported. Liz Cheney, the Republican vice-chair of the committee, said Trump had "lit the flame of this attack". Trump supporters stormed Congress on January 6, 2021 as lawmakers met to certify Joe Biden's election victory. The Democratic-led US House of Representatives select committee presented its findings from a year-long probe on Thursday. It showed clips from interviews it conducted with members of Trump's inner circle. Read the full report on BBC.

Rajya Sabha voting coverage by the Indian Express, counting likely to be delayed

The Indian Express reported that the biennial elections to Rajya Sabha were held to fill 57 seats in the Upper House across 15 states. The report said as of now, 41 candidates belonging to various parties in 11 states — Andhra Pradesh, Chhattisgarh, Bihar, Jharkhand, Madhya Pradesh, Odisha, Tamil Nadu, Telangana, Uttar Pradesh, Uttarakhand and Punjab – have won unopposed. Voting for the elections for 16 vacant seats in four states, Rajasthan, Haryana, Karnataka and Maharashtra began at 9 am on Friday. The counting of votes that was scheduled to begin at 5 pm is likely to be delayed due to BJP and Kartikeya Sharma’s complaint seeking disqualification of two Congress votes.  Read the full report on the Indian Express.

TeleSUR reports that on Thursday, President Hassan Sheikh Mohamud was inaugurated as Somalia's tenth leader amid tight security in the capital Mogadishu. In his speech, Mohamud promised to stabilize Somalia which has been facing terror threats and spearhead efforts to bring peace and cohesion to the country, the report added. He appealed to the international community to help Somalia overcome the current drought, the worst in at least 40 years. Read the full report on TeleSUR.

The Straits Times report that over 1,50,000 in Thailand register for cannabis planting 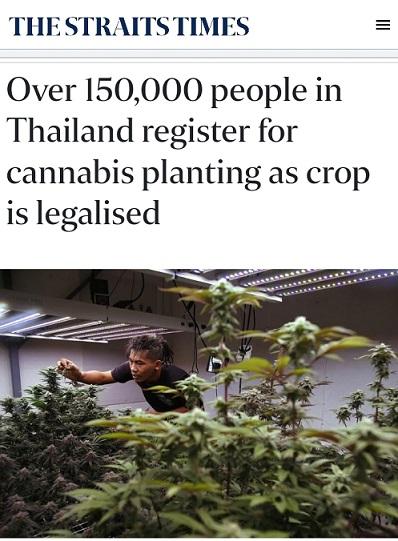 More than 150,000 people registered to grow marijuana and hemp in Thailand on Thursday as the country became the first in Asia to decriminalise cannabis, the Straits Times reported. The report added that a website created for prospective growers crashed due to the rush, prompting the Thai Food and Drug Administration to offer an alternate platform. Users had accessed the FDA website and its app more than 8 million times as of 3pm local time. Read the full report on the Straits Times.