News Dabba 09 May: 5 stories across the web for a balanced news diet

Anushka Vani brings you the daily updates that the internet is talking about through various news websites. Here's a glance through some of the National and International news updates, from cyclonic-storm Asani, Delhi's demolition drives, to the value of the Indian rupee against the US dollar.

The Hindu reports Asani turned into a severe cyclonic storm

The Hindu reported that the cyclonic storm Asani has moved nearly northwestwards with a speed of 14 Kms in six hours where it lay centred, about 610 Km northwest of Car Nicobar, 810 Km Southeast of Vishakhapatnam, 500 Km west of Port Blair and 880 Km south-east of Puri on Sunday evening. The report stated that as it moved northwestwards, it intensified into severe cyclonic storms over southeast Bay of Bengal. The storm is predicted to keep moving northwestwards till the evening of May 10. Heavy rains are forecasted in Srikakulam, Vizianagaram and Visakhapatnam districts on May 10 and 11. Read the full report on The Hindu.

Borders sealed in Himachal Pradesh as Khalistan flags hung on the assembly gate, The Wire

The Wire’s today reported about the Khalistan flags that were found tied on the main gate of the Himachal Legislative assembly complex along with slogans scribbled on the walls. The report mentions that the Himachal Pradesh Police have booked Sikhs for Justice leader Gurupatwant Singh Pannun under the lawful Prevention Act while also sealing the state's borders in response. The report further says that Pannun has been booked as the main accused under section 13 of the Unlawful Activities Prevention Act (UAPA) and Section 153 A and 153 B of the Indian Penal Code, besides section 3 of the Himachal Pradesh Open Places Prevention of Disfigurement Act of 1985. Read the full report on The Wire.

Al Jazeera covered the Philippines polls as millions of Filipinos gathered to vote and elect a new President pitting the son of the Philippines' late director against a liberal human rights lawyer. The report mentions that the polls opened across the Southeast Asian nation at 6:00 am (local time) on Monday. The polls might set new records as 67 million people registered to cast their votes and the election authorities are expecting a high turnout. The polling hours are extended keeping in mind the pandemic with necessary precautions such as avoiding crowds and long queues. The polls will end by 7:00 pm (local time). Read the full report on Al Jazeera. 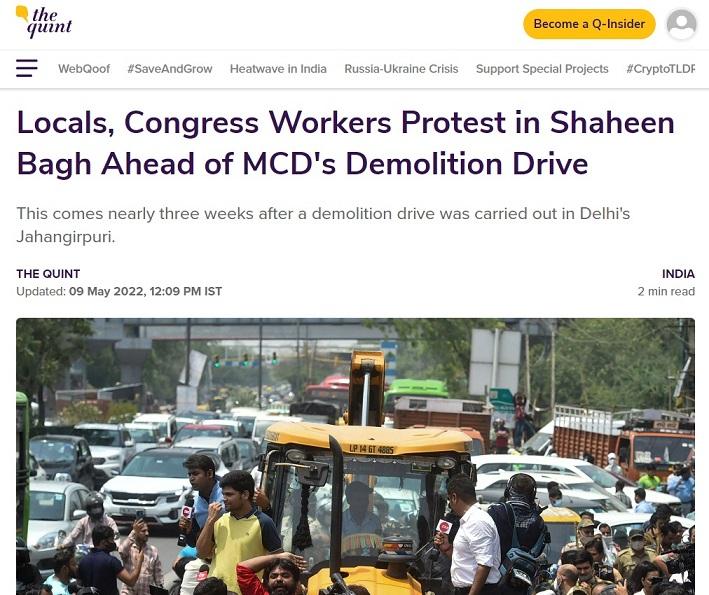 After the demolition drive in Jahangirpuri, Delhi, the Quint reported locals and Congress workers gathered in Delhi's Shaheen Bagh today to oppose a scheduled demolition drive. The report mentions that Shaheen Bagh was the epicenter of anti-Citizenship Amendment Act (CAA) protests in 2019-20. The locals and the Congress workers sat on the roads and stood in the way of the bulldozers that were brought in by the BJP-led Municipal Corporation (MCP) of Delhi, against the alleged illegal settlements. Read the full report on The Quint.

Rupee falls all-time low against the US dollar, The Economic Times

The Economic Times has reported that the Indian Rupee plunged to an all-time low against the US Dollar on Monday. This is a result of the surge in the US Treasury yields that followed an aggressive rate hike by the Federal Reserve which caused the greenback to strengthen globally. The report further states that the weakness in domestic equity markets and concerns over relentless sales of the Indian assets by overseas investors is also one of the reasons for the currency drop. The Indian Rupee has hit a low of Rs 77.40 to the US Dollar. Read the full report on ET.