News Dabba 05 May: 5 stories across the web for a balanced news diet

Anushka Vani brings you the daily updates that the internet is talking about through various news websites. A glance through some of the National and International news updates. From unraveling the truth about India’s vaccination drive to renegotiating confidence-building measures and the threat to abortion rights in the US. 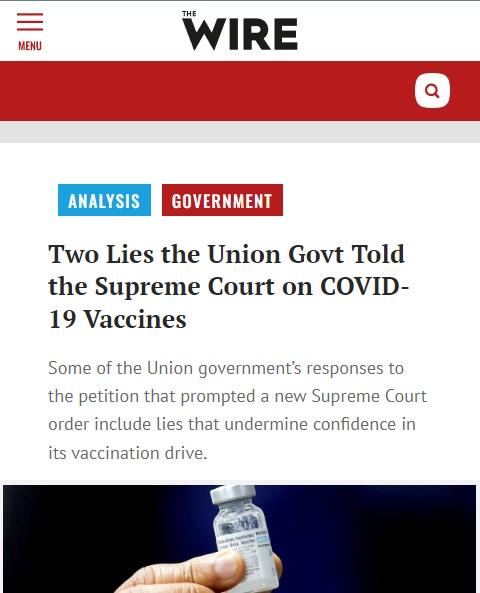 In this report, TheWire has highlighted the statements made by the Supreme Court (SC) on May 2, ‘that vaccinations should not be mandatory’, to which the Union Govt response triggered an order running into the 115-page judgement that includes the lies undermining India’s Covid-19 vaccine drive. The report has shared an analysis of the truth behind the covid-19 vaccine such as the NTAGI (National Technical Advisory Group of Immunization) approval, that the Indian government has claimed to have gotten, and the AEFI (Adverse Events Following Immunization) assessment data. Read the full report on TheWire.

The report mentions the tension that broke out between the Indian Army and China’s People's Liberation Army in Eastern Ladakh along the LAC (Line of Actual Control) in 2020. As per the reports Deependra Singh Hooda, former Chief of the Northern Command on Wednesday in continuation to the panel discussion on the crisis in Eastern Ladakh said that “We need to talk about patrolling patterns and aspects of infrastructural development (in the region). Maybe it is time to sit down, have another look at this whole area of CBM, see which aspects have been creating tensions for the past five-six years and look at trying to resolve these issues”. Read the full report on ThePrint.

As per the report, The Central Bank of India is planning to shut 13% of its branches as it was under financial pressure for a few years now. The bank is planning to meet the financial needs by reducing the number of branches by 600 by either shutting them down or merging the branches prone to loss by the end of March 2023. The report has also mentioned that the closure of the branches was not reported previously, while it has a total network of 4,594 branches. Read the full report on ET’s website.

This report by The Indian Express is in reference to Section 124 A of the Indian Penal Code. A three-judge bench chaired by Chief Justice NV Ramana has asked petitioners and the Centre to file their written arguments about the same by May 7. While the bench has also granted the Centre to file its counter-affidavit that explains its stands vis e vis Section 124A by May 9. While dealing with the offence of sedition the SC will first decide if the matter needs to be referred to a larger bench. The report has also mentioned that Attorney General KK Venugopal said, ‘the ruling in Kedar Nath Singh vs the State of Bihar is the correct law on the subject and that it need not be sent to any larger bench’. Read the full report on Indian Express.

Huffington Post states that the abortion ruling is a political earthquake

In discussion with the leak on the abortion ruling, Huff Post report has highlighted that the SC ruling is likely to overturn the Roe. V. Wade. The effects of this would be seen on the midterm elections. If this ruling gets through it would be the least appreciated political move. The report has also mentioned stats that state that, ‘only a third of Americans, at most, support overturning the 49-year-old precedent that gives women the right to have an abortion.’ Read the full report on Huffington Post.