The in'disposable' problem of the pandemic

While the disposables increased, recycling reduced during the lockdown.

Steaming hot tea, commonly known as cutting chai served in the iconic tea glasses is the identity of India’s roadside tea stalls. However, reopened after around a three-month-long lockdown, these traditional tapris are now serving tea in disposable paper or plastic cups, as issues of hygiene and safety cropped up amidst the prevailing Coronavirus situation.

Tonnes of garbage generated by people each and every day is an issue of major concern all over the world. With growing urbanisation and unplanned expansion of cities, segregation and disposal of garbage is a severe issue in India, especially Indian cities. Despite a battle against plastic waste, non-biodegradable disposable waste is still a huge part of the country’s garbage. The COVID-19 pandemic has added to this, with plastic and other disposable items, especially pertaining to food and medical material, becoming a crucial part of the day-to-day garbage.

“Usually the amount of waste, and as well as the amount of plastic and other disposable garbage in it increases as Diwali nears because people start cleaning their homes. However, this whole process began with the lockdown in the months of April-May itself this year,” says Pune-based waste picker Shobha Bansode (associated with SWaCH), as she is about to wrap up her morning waste collection routine. She has also observed increasing plastic in her day-to-day garbage collection. “More plastic bags, containers, plastic cups, plastic wrappers are found now,” she says.

However, while waste coming from some houses might have increased as a result of everyone staying at home during the lockdown, as per the analysis of SWaCH Pune, the overall waste generation during at least the initial few months decreased, as many people left the city to go back to their hometowns before as well as during the lockdown.

“Even in a city like Bangalore, where the population is slightly more aware of the non-degradable waste, the consumption of disposable material, majorly made of plastic certainly increased during the COVID-19 lockdown,” says Nalini Shekhar, Founder of Hasiru Dala (Green Force), an organisation working for waste pickers of Bangalore. 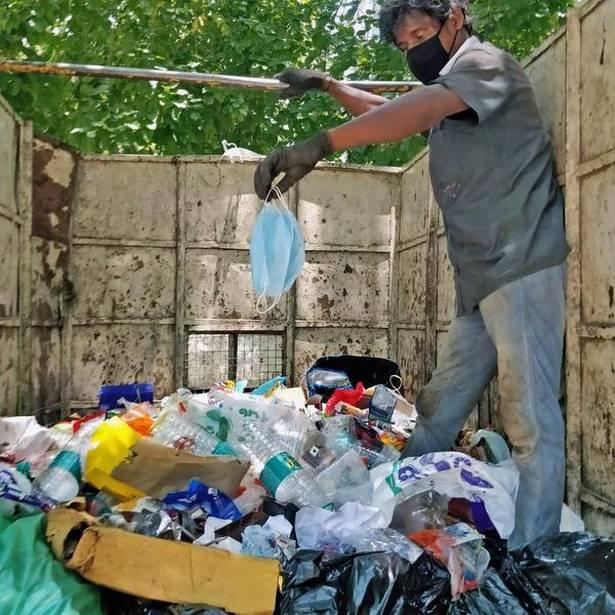 She adds, “The singles masks were a huge problem in the beginning. When the lockdown was announced, many people started using these disposable masks. But this changed soon, as people became aware of using reusable masks. However, numerous plastic sanitiser bottles, disposable gloves, which were earlier not commonly seen in domestic garbage, have begun making significant appearances now. This is going to be a major concern in days to come.”

As per a report by WWF in April 2020, if even one percent of the masks were disposed of incorrectly could be hazardous for nature. And if these masks were “perhaps dispersed in nature, this would translate into 10 million masks per month dispersed in the environment. Considering that the weight of each mask is about 4 grams this would lead to the dispersion of over 40 thousand kilograms of plastic in nature: a dangerous scenario that must be defused.”

However, while the disposables increased, recycling reduced during the lockdown. “Our waste pickers segregate the waste collected by them every day and pick up the recyclables that have a good value. These recyclables are sold to the scrap shops in the city, which then go through a chain of stakeholders, before reaching the recyclers. However, almost until the end of May, the scrap shops were closed. Due to this, many waste pickers did not pick up recyclables from the waste, as there was no way to sell them. Most waste pickers also did not have enough space in their homes or anywhere else to store the recyclables until the shops opened. Thus, all of these went straight to the dumps during the initial months,” said Sarthak Tapasvi, Programme Manager at SWaCH Pune.

No to Plastic? Not Anymore

In the last three months, Medha Tadpatrikar, Co-founder of Rudra Environmental Solutions, stated that the plastic collected by the company has increased several times. Rudra collects plastic waste from households in Pune and Pimpri-Chinchwad to convert it into fuel.

“Initially, for a few months when the lockdown began, we could not collect the plastic waste from people due to movement restrictions. At the time, we had appealed to the people to save all the waste, and give it to us when we resume services. We were happy to see that most people obliged to this. However, the amount of plastic that we get has increased by at least 20 to 25 percent,” Tadpatrikar states.

"Plastic pollution was already one of the greatest threats to our planet before the coronavirus outbreak. The sudden boom in the daily use of certain products to keep people safe and stop the disease is making things much worse,” said Pamela Coke-Hamilton, Director of international trade at the United Nations Conference on Trade and Development (UNCTAD) in an article published in July 2020. Historical data tells us that about 75 percent of coronavirus plastic will likely become waste clogging our landfills and floating in our seas. And the costs are staggering, the article goes on to say.

In fact, Indian cities like Bangalore or Delhi, or states like Kerala that had effective policies on single-use plastic ban also reversed a lot of restrictions either due to lack of other resources or due to safety reasons.

With restaurants and eateries shut for dine-in during the lockdown, home delivery of food also led to an increased generation of plastic and other disposable waste in households, especially in urban and semi-urban areas. For instance, as per a report in a science journal, “Individual choices during lockdowns are also increasing plastic demand. Packaged take-out meals and home-delivered groceries contributed an additional 1400 tons of plastic waste during Singapore's 8-week lockdown.” 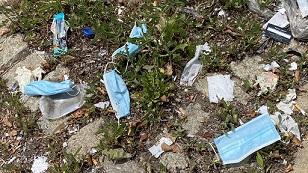 No Segregation of Hazardous Waste

However, one of the major concerns ahead of the waste pickers in all cities is the lack of segregation of hazardous waste. “For the last 15 years, we have been trying to tell them to separate wet waste from dry. And people still don’t do that. Do you think they are going to dispose of their masks separately?” questions Bansode, who works at Prabhat Road. She has been scared of catching infections since the very beginning. “But we could not stay at home. What would we eat? And more than that, who would collect all this garbage then,” she says.

Jyoti Mhapsekar, Founder of Stree Mukti Sanghatana (a waste pickers organisation) in Mumbai also called out the government machinery for not asking people to strictly segregate hazardous, infectious waste. “In Indore, they even made a separate compartment in the vehicles to transport hazardous waste. In Mumbai, the waste pickers have not had a single day without worry, as amidst the rising number of cases, our waste pickers have had to collect waste, which is nothing but a mix of masks, gloves, medical waste from hospitals, and whatnot. I don’t understand why all cities cannot care for their waste pickers, and introduce better segregation programmes,” Mhapsekar says.