Students on the streets, go beyond marksheets

Should educational campuses be political, the debate has been perpetual.

“It’s what we learn beyond classrooms at our institutes is more significant, it reflects in our education, our performance,” says film worker Harishankar Nachimuthu, who is also the former student and president of the students association at the Film and Television Institute of India (FTII), Pune. Listed amongst one of the premium filmmaking institutes in the country, the state-funded institute is also known for its strong and vocal student unions.

‘Oh the FTII students, they are always protesting!’ is something that one can often hear about the students, just as we hear about the students at Delhi’s Jawaharlal Nehru University (JNU) or Jamia Millia Islamia. Last year, after the protests at the JNU against the hostel fee hike, and later the protests against the Citizenship Amendment Act (CAA) and the National Register of Citizens (NRC) at JNU as well as Jamia sparked debates on social media, as to what are these students who are always protesting actually learning at the cost of the taxpayers’ money.

“I think what makes our institute and others like ours different from many others in the space that we have here for organisations of students. Many campuses don’t offer this space for the representation of students’ voices,” says Aadhit V Sathvin, President of FTII Students Association (FTIISA).

On October 28th, a diploma film by the students of FTII's 2013 batch, 'Catdog', has won the first prize at the Cinéfondation selection, the student's section of the Cannes Film Festival of 2020. the only Indian representation at the film festival, this film also competed with 1952 entries from 444 film schools across the world. Taking the stage to voice the students’ concerns on the occasion, the FTIISA released a statement.

“It is also worth noting that the film took shape and made its way to this prestigious award in spite of continuous institutional harassment of the students of FTII by the administration. The director of the institute Mr. Bhupendra Kainthola went so far as to say two years ago at IFFI, Goa that the film wing students of the institute are performing badly. This comment comes at a time when the current administration under the director himself has started many arbitrary practices that directly hinder academics and the welfare of students. With a next to non-existent redressal system, the complaints of the students have also been repeatedly ignored,” the statement signed by Sathvin and Rajarshi Mujumdar, General Secretary, FTIISA said.

Since the past few years, FTII campus has been bustling with protests, right from the agitation against the appointment of actor Gajendra Chauhan as the chairperson of FTII’s Governing Council in 2015, to the latest protests against the syllabus and the fee hike at the institute, as well as the participation of the students in protests against CAA/NRC in Pune. However, amidst all this, the students have not failed to continue their education and work, winning several accolades and awards at different film festivals. Interestingly, this has been the case with other institutes that are often at the receiving end of similar criticisms. JNU and Jamia, which were amongst the main centres of the CAA/NRC protests, have maintained their positions in the top 10 of the Human Resource Development (HRD) Ministry's National Institutional Ranking Framework (NIRF) this year. 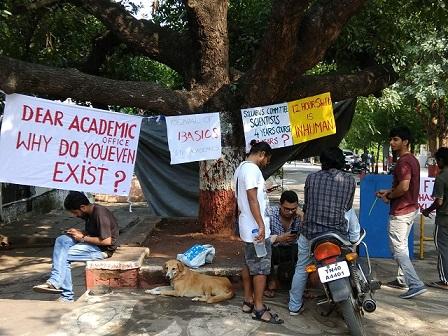 “I think our campus does influence how we are and the work that we do. Having a political understanding also helps us develop a better understanding of reality as well. Moreover, the presence of students from all over the country in one campus acquaints us to pan-Indian cultural and social diversity. And I am sure that all of this reflects in our work,” Sathvin said while talking to Indie Journal.

While Nachimuthu believes that the rankings and awards should not necessarily be looked at as a measure of any institute's quality, he does emphasise that the values that these democratic campuses impart to their students are more important. “Our institute taught us to be kinder, to be more compassionate, and more responsible. Our campuses teach us to uphold these values. That’s what makes them better,” he adds.

While the trend of criticising students for protesting has been seen on social media in the past few years, strong student unions and protests have been an important element of the identity of India’s campuses. Historically, post-independence India has seen students unions across the country rising in agitation for causes not just associated with education, but national issues as well, whether it’s the students' movement during the Emergency led by Jay Prakash Narayan, the Anti-Hindi Movement in Tamil Nadu in 1965, or the recent protests following the death of Hyderabad Dalit student Rohith Vemula by suicide.

Speaking about the importance of unions in shaping the values amongst students, Nachimuthu continues, “In today’s world, we are taught to be more self-centred. However, when we are part of an organisation like a student union, it helps us develop a sense of responsibility to the community. Unions help develop the urge to bring about a change.”

He adds, “Wherever the unions are strong, it has been observed that the ragging on campus is very less. Unions can be crucial in getting a better infrastructure for the students on campus, and this can aid in the betterment of the quality of education.”

However, it’s not always easy for the students to sustain on the campaigns while being politically aware and vocal. Former FTII student and film editor Shini JK shares, “After the protests in 2015, after the then interim director’s office, was gheraoed by the students, we were restricted from using classroom theatres. The imposition of restrictions has continued through the following years, the students don’t seem to have a place to express freely anymore, as they once had. One notice imposed against a student by the administration can lead to a loss of scholarship or the opportunity to participate in the exchange programme. However, despite all this, the students are performing well, at the same time trying to keep their freedom of expression alive,” Shini adds.

Attacking the party in power, N Sai Balaji, former president of JNU Students Union and currently, the National President of the All India Students Association (AISA) states that the government’s stand is anti-agitation, anti-intellectual and anti-knowledge.

“Students must always question. It’s very critical. Questioning helps you fight for your rights, the rights of your society. However, the government does not like this, as it challenges their insubordination, and then comes the criticism and propaganda against those who speak up,” Balaji states adding that not just the students, but the government has created problems for everyone who is protesting, whether it’s the farmers, or 80-year-olds fighting for human rights.

He further says, “Education is not just about learning right? When you are aware and vocal as students, it helps you to empathise. It helps you treat others equally, it helps build a better society.”

“Without unions, the problems of the students will remain ignored. Student unions have the responsibility of ensuring that the resources with the education sector are utilised well for the welfare of the students. In fact, if you see, most of the political, social leaders, businessmen, have emerged from some of the other student unions and movements in the past. That’s why being aware since you are a student is very important. If students don’t fight for their cause, who will?” Thombare questions.