Solapur's 'Shaheen Bag' gets an unusual letter of support, from the Hindu Mahasabha!

Many women have been on protest at Poonam Gate in the city for more than 20 days.

While the ongoing politics surrounding the Citizenship Amendment Act (CAA) and National Register of Citizens (NRC) of India clearly seeks to tell the ‘Right’ from the ‘Left’ in the country, the Akhil Bharatiya Hindu Mahasabha (ABHM), Solapur District has extended support to the anti-CAA/NRC protest by the Solapur women at the city's Poonam Gate.

Women in Solapur have been on protest in solidarity with the women protesting at Shaheen Bagh, Delhi near Poonam Gate in Solapur Zilla Parishad compound. Many organisations like the Bhim Army Women's Wing, Samvidhan Bachao Samiti, etc. have participated in the protests. Interestingly, While ABHM was in controversy just around 15 days ago when one of its leaders announced that they would like to felicitate the Jamia shooter, Subhash Gaikwad, Solapur District President of Akhil Bharat Hindu Mahasabha has issued a letter expressing support to the women, dated 13 February 2020.

“Samvidhan Bachao Samiti, many organisations working for the Bahujan community, and women under various organisations have been protesting at the Solapur Zilla Parishad (Poonam Gate) from February 1, and ABHM Solapur declares its support to this indefinite protest,” the notice on the ABHM letterheard, signed by Gaikwad, read. 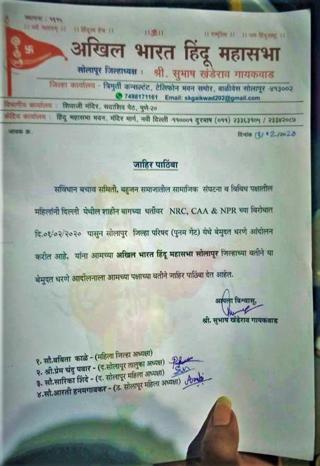 “Although Prime Minister Narendra Modi is considered to be Hindutva icon by his followers, he is, and has always been, a ‘one-man show’. I would not be surprised if more organisations like this on a local level take a stand against him,” said Nanded-based Political Analyst Ubaid Ba-Hussain while speaking to Indie Journal.

He added, “Many organisations which are pro-Hindutva still feel suffocated under Modi’s regime. Moreover, there is a significantly less number of Hindus, mostly only those who are Modi-Bhakts, who feel that CAA/NRC would not affect them badly. Many Hindus too see it as a menace. The protest against CAA/NRC is a people’s movement, it has remained undeterred despite political attempts to stifle it. This, at the local level of politics, has created a huge pressure over the local leaders. If you have noticed, many pro-Hindutva fringe organisations have kept themselves away from the discussion around this controversial issue.”