Graduate constituencies too are becoming a dominion of political parties.

At a point of time, teachers’ constituencies saw a stronghold of candidates from different prominent teachers’ associations in the state, but for the last few years, the candidates from and backed by political parties have begun taking control over most of the seats and this has raised concern among teachers’ organisations and political watchers.

“This election is essential to bring the issues of the education sector in the purview of political agenda,” says MLC Kapil Patil from Mumbai Teachers constituency. The biennial electoral rolls of the Graduates’ and Teachers’ Constituencies of the Maharashtra Legislative Council are going to be held across the state on December 1.

“Until around 2004, the candidates from the different shikshak sanghatana (teachers’ associations) were more influential and got elected. However, for the last decade and so, the political parties have begun invading this space. With their grand campaigns and bribery, they have begun taking over these elections. They get teachers and educational institutes and societies to give them unchallenged support. How can the teachers' associations compete with them,” says VG Pawar from Osmanabad, who is the General Secretary of Marathwada Shikshak Sangh.

With the representation from the teachers’ constituencies increasingly coming from the political parties instead of the teachers’ associations, the teachers fear that the real problems in the education sector will take a backseat, as no one will raise them in the house.

“MLC from the constituency who is part of a political party will obviously be controlled by the political party he/she belongs to. If the party leaders forbid them from raising certain questions pertaining to the betterment of the education sector and teachers, we fear that the issues will remain neglected. These candidates won’t be as passionate about our issues as we are,” said SG Barde from Amravati, President of Vidarbha Madhyamik Shikshak Sangh.

Teachers’ associations have a long history of fighting for the challenges faced by teachers, which has led to several legislative decisions in favour of the state’s teaching community. Barde adds, “Until 1073, the salaries of the teachers were not made directly to their bank accounts. At the time, MLC NB Sapate, who was a part of Vidarbha Madhyamik Shikshak Sangh, raised the issue in the legislative council and also conducted protests.

Since 1973, the teachers began to get paid directly to their bank accounts. Another important fight led by a member of a teachers’ association could be the protests for implementing the fifth pay commission for the teachers. VU Daygavhane of the Maharashtra Rajya Madhyamik Shikshak Mahamandal, who was MLC at the time, led the ‘Pariksha Bahishkar Andolan’ (boycott examination protests). This also eased the way to implement sixth as well as seventh pay commission for teachers.” 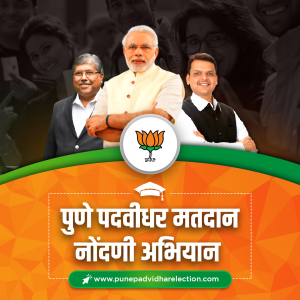 Adding to this, MLC Patil also states that while political parties certainly have the right to contest these elections, the candidates, as well as the parties in power, should also be held accountable and take responsibility for the decisions and issues in the education sector. “Education is facing several challenges in the state as well as in the country.

The New Education Policy (NEP) 2020 threatens to privatise the sector, which could hamper the educational opportunities of the underprivileged communities. Why hasn’t the Maharashtra Government rejected the Policy like Kerala or West Bengal governments? Why is this government also ignoring the issue of teacher’s pensions or trying to shut schools with fewer students? Who is going to raise all these issues?” Patil questioned.

Apart from the fear of the real issues remaining unacknowledged, the teachers are also concerned that the stronghold of political parties in the teachers’ constituencies could lead to decisions that are more in favour of the educational institutes and societies, rather than the teachers.

“It’s in the hand of the teachers,” Patil said, “I am sure the teacher voters will not let those in power take over easily.”