On Republic Day, a village protests after waiting years for a gram panchayat

A people in search of being recognised as citizens.

Gangubai Kale sat outside a small mud-built house, with a group of people from her village, old Ambegaon in Pune district’s Ambegaon taluka. She was anxious as she had taken a break from her work at the local brick kiln, where she gets paid Rs 100 for lifting every 1,000 bricks. The villagers, mainly belonging to the tribal community Katkari, one of the primitive tribes in Maharashtra, had gathered to plan a protest on January 26th, 2021, to demand a gram panchayat for their village, something they have been denied for more than the past 30 years.

The members of Katkari tribe living by the hills on the bank of Dimbhe dam in Pune district’s Ambegaon taluka have been left to fend for themselves, as they are not part of any gram panchayat in the area. While they have been living in the homes built for them by the district administration around 10 years ago, their houses or their lands have not even been registered on their names, in the absence of a gram panchayat to accept them. Around 15 villagers, with support from the Akhil Bharatiya Kisan Sabha and Adivasi Ekjut Sanghatana, have now started an indefinite hunger strike starting today (January 26th) if their homes are not registered on their names by then. Others have decided to join them soon if their demands are not paid attention to.

The area where the community resides was earlier a part of the old Ambegaon gram panchayat, which went underwater when the Dimbhe dam was constructed under the Kukadi project, around 30 years ago. While the rest of the village (the area that went underwater) was rehabilitated near Ghodegaon (Ambegaon taluka). However, the 22 Katkari and four Thakar families from the old Ambegaon village that has been living on the bank of the dam since have had to live a life of hardships as they are not acknowledged by any gram panchayat.

What happens when there’s no gram panchayat?

Cyclone Nisarga that hit India’s West Coast in June 2020 also affected the hilly regions of Ambegaon taluka. “Our small fishing boats, fishing nets were destroyed or lost in the cyclones. The roofs of our houses fell. We faced severe losses. But unlike all the other villages, we did not get any compensation or support from the government as we do not have a gram panchayat to conduct a panchnama of the damages,” Gangubai said.

The village has no electricity. Even the newly constructed homes do not have access to electricity. “We once stopped the car of our MLA, and he said the electricity cannot be arranged unless there is a gram panchayat. “Te mhanale topryant akda takun veej ghya. (He said get an illegal connection until then),” one of the villagers said.

Another resident Mandabai Mukne said, “Every village has its share of conflicts and fights. Who are we supposed to approach in those situations? There is no one to resolve our conflicts, our problems. If we had a gram panchayat like the other villages and elected representatives, we could go to them for our issues.”

While the children in the village would get food from an Anganwadi Centre nearby under the Amrut Ahar Yojana, the Anganwadi Sevika has recently told them that the children who do not have Aadhar Card will not get food from the next month. “Many of the deliveries here are home deliveries. Plus there is no gram panchayat, so most children do not have birth certificates. There was an Aadhar drive here a few years ago, so some have Aadhar Cards, but the children born after that don’t due to the lack of documents,” Raju Ghode from Borghar who is associated with the All India Kisan Sabha told Indie Journal.

The Katkari community is one of Maharashtra’s most primitive tribes. The livelihood of these families is dependent on water, as they indulge in fishing activity. However, since the construction of Dimbhe Dam, fishing has become difficult for these people with their traditional equipment. The families have been relying more and more on the brick kilns in the area.

“In the brick kilns, we are paid either on a daily basis or for every thousand bricks that we lift. We hardly get over Rs 250-300 per day. And that’s for the men. Women are paid Rs 100 for every thousand bricks that they lift,” says another resident Navnath Valane. He adds, “We need the government to provide us with some other source of livelihood. We cannot totally depend on fishing or brick kilns, and we need government schemes and support to find us supplementary sources of income. And that will not happen until we are recognised as part of a gram panchayat.”

While Ambegaon was one of the PESA [Panchayat (Extension to Scheduled Areas)] villages declared by the President of India, the funds received for the same did not reach the Katkari Community. “The funds went to the New Ambegaon village. The newly rehabilitated village does not have any tribal population,” Budhaji Damse of Adivasi Ekjut Sanghatana, who has been working for the villagers’ issues for several years said.

Moreover, the villagers are deprived of several schemes and programmes meant for the scheduled tribes as there is no local governing body to implement them here. “Men and women are paid unequally at the brick kilns despite doing similar work. In Borghar, that’s not the case, as the gram panchayat ensures minimum wages to everyone,” Ghode said. 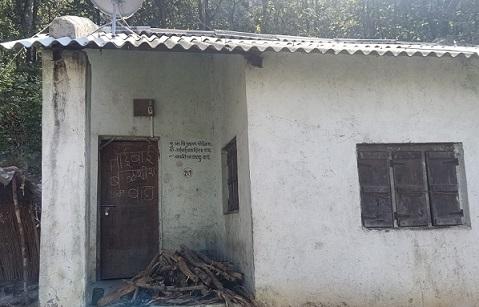 What do activists suggest?

“They had earlier offered us that these families could be registered under the new Ambegaon gram panchayat near Ghodegaon. However, that is around 40 km away from where these people live. They work on daily wages, and at times, do not even have enough money to take those who are sick to a doctor in Ghodegaon or even Dimbhe which is hardly 15kms away. How will they travel all the way to New Ambegaon for each and every small work,” Damse said.

The activists have demanded that the old Ambegaon must be recognised as the revenue zone gram panchayat that it was, and connected to the gram panchayat of Borghar village, which is around three kilometres away from where the community currently resides. “The nearest school for the villagers is in Borghar. They are registered as voters in Borghar. Some of them have registered ration cards there. We have been requesting the government to connect the village to Borghar, and we have tried at every level. The Borghar gram panchayat has given NOC for the same in 2016 itself,” Ghode said.

This isn't the first time that the community has raised its voice. In November 2016, the community had warned that they will take jal samadhi if their demands are not met. The protest was called off after the Ambegaon tehsil authorities had reportedly given a written assurance that the 26 families would be included in the Borghar gram panchayat. But more than four years later, the villagers are still waiting.

When Indie Journal contacted the Pune District Collector Dr Rajesh Deshmukh to enquire about the same, the Collector said that he will look into the matter.