More than 200 villages have been submerged in water

Heavy rains in Gadchiroli have caused the Parlakota river to overflow, thus submerging more than 200 villages in the district under water. While almost 500 civilians have been rehabilitated by authorities, contact with more than hundred villages is yet to be established to initiate any rescue operation.

Deepak Chatap, a flood relief volunteer who reached Gadchiroli this week said, “The rising water level has completely destroyed the crops and mud houses. 150-200 villages have been submerged under water. There are a few slum areas in Bhamragarh where people were sitting in their houses in knee-deep water because they don’t have anywhere else to go.” He went on to say that despite the area being on red alert, no medical attention or relief aid has been sent in by the government officials, thus leaving the affected areas in the care of voluntary assistance only.

According to the National Disaster Management Guidelines issued by Government of India, authorities are required to provide adequate number of flood shelters at suitable locations in the flood plains with basic amenities such as drinking water, sanitation, medical treatment, food, etc. for the people to take shelter during floods. A relief team, medical team, a sociologist, a psychologist and a psychiatrist are also required to be deployed to the flood affected areas. However, Chatap has stated that no such teams have arrived to help the victims in flood affected areas of Gadchiroli.

“We heard of a pregnant lady who required urgent medical attention, but owing to absence of a proper medical team, she miscarried her child. Most of the people have no access to food or clean drinking water since couple of days”, Chatap informed.

Siddhi More is another volunteer in Aarattondi village of Desaiganj tehsil who has been collecting relief aid to distribute amongst the flood affected areas. Speaking about the victims in flood shelters, she said, “Since most of them are still in shock, they haven’t been eating or drinking water properly. Some of us have had to feed them with our own hands. Many of them have high fever or are visibly sick, yet they refuse to take any medicines. We can’t forcefully administer these medicines either; we need some kind of medical attention here.”

Sudip Ranguwar, resident of Aheri has also been traveling to flood affected areas across the district. When questioned about the functioning of authorities, he said, “Talathi had come earlier to ask about the things we all require as part of relief aid. They made a long list and left, but it will take more than 2-3 weeks for these things to reach us. It’s too little too late. Meanwhile, we have only one doctor who has been providing medical attention to the victims in Kamalapur and nearby areas.”

Unquestionably, absence of relief teams has had an obstructive impact, but Chatap says the Bhamragarh tehsildar, Kailash Andil has been extremely supportive in helping the victims. However, Andil not been able to garner similar support from his seniors to get the relief operations maximised.

With communication in more than 100 villages being cut off, it has been problematic to understand the impact of flood there and estimate the relief operation they require. Ranguwar said, “There’s barely any network here. So the flood situation hasn’t gone viral yet, like the Kolhapur flood situation did. It has also restricted any media exposure resulting in too little voluntary and government help for us.” Abhi Raitak, as student of Savitribai Phule Pune University hasn’t been able to contact his family in Chamroshi for a week either. “I have contacted the few officials I know for an update, but mobile phones of most of these officials are out of network. With no communication access and news of surrounding villages being submerged in water, we can’t think straight. Since it has stopped raining, I will leave for my village next week with a team of volunteers”, he said. 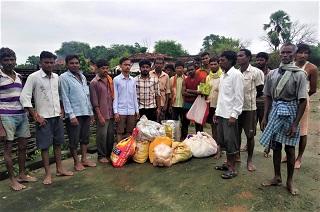 Chatap and his team recently carried out a successful rescue operation in the naxal village of Somanpalli in Gadchiroli. Describing the situation there, he stated, “We walked for three kilometres through jungles to reach the village. More than 50 people were on the roads here as their houses were destroyed; one of them even succumbed to the heavy water flow. They did not have access to any food for 4 days and the children were severely impacted”. Though the victims have now received relief aid, the next step comprises of medical attention and government intervention, which won’t be reaching the victims soon.With surrounding areas receiving 320 mm rainfall in the last week, India Meteorological development has predicted average rainfall in Gadchiroli-Chandrapur areas until September 12th. While the water level has started subsiding, challenges like rebuilding villages, repairing infrastructure, rehabilitating civilians and treating the victims will now steer the flood management situation.

Uttarakhand's Aarey moment; 10,000 trees in Thano forest to be cut for Airport expansion