The data revealed that around 2.48 percent children suffered from Severe Acute Malnutrition

In response to the news of increasing malnutrition in Nandurbar district during the months of June and July due to the lockdown breaking out, the Nandurbar District Collector has released a statement that the data revealed is a result of an annual drive conducted in the district to monitor malnutrition in the difficult and inaccessible regions. The data revealed that around 2.48 percent of the children between zero to six years of age suffered from Severe Acute Malnutrition (SAM), while 12.45 percent of the children in the district were found to have Moderate Acute Malnutrition (MAM). Nandurbar is known to be one of the most severely affected regions with respect to malnutrition amongst children.

“In Nandurbar, tackling malnutrition is a tough task, as reaching out is difficult in different parts of the district, especially the remote areas like Akkalkuwa and Dhadgaon. That’s why, every year, we have been conducting a special drive wherein we test children in the age group of zero to six years, to create a database of the children with MAM and SAM,” Nandurbar District Collector Rajendra Bharud said in the statement that he released.

“We create such a database in June and July every year, and then we follow up with the programme to tackle malnutrition throughout the year. Thus, by March-April, the numbers reduce each year,” Bharud said. 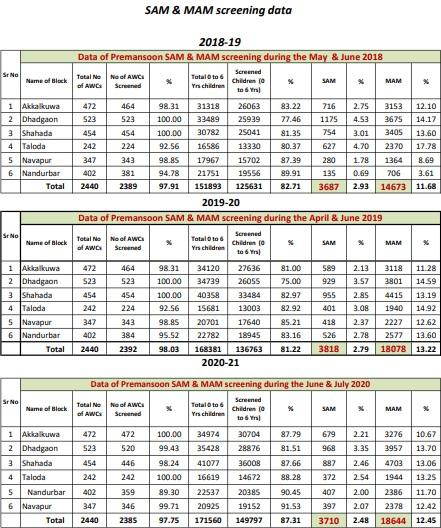 As part of the programme, Bharud added, children in the area are provided with full meals through AWCs. “We are also trying to reach out to women for promoting spacing in pregnancies, preventing multiple pregnancies, early marriages or motherhood. We are also trying to ensure nutrition to mothers during and after pregnancy. It’s going to be a long way before we achieve our goals,” he said.

However, local tribal activist Kailas Vasave added that there might be a possibility that the malnutrition cases in the area might have risen due to the lockdown. “Before lockdown, the children would get cooked balanced meals at the AWCs. This year, because of Coronavirus lockdown, the children were given groceries instead of cooked food. That might have an impact on the health of the children, as we don’t know how many children are now actually eating meals as they used to when they went to Anganwadis,” Vasave added.

The data of the last three years, released by the District Collector along with his statement, shows a higher number of children suffering through both types of malnutrition last year, as 2.79 percent of the children who were tested had SAM and 13.22 percent had MAM in 2019-20. In the year 2018-19, however, the percentage of children with SAM was slightly higher (2.93), while those with MAM was slightly lower (11.68).

Bharud stated, “Since Nandurbar has been declared an aspirational district, we have been trying to deal with malnutrition as much as possible with the help of various measures and programmes. Only continuous counselling can bring a long term solution to this.”