India was one of the countries where the increase in the proportion of flood-affected people is amongst the highest. 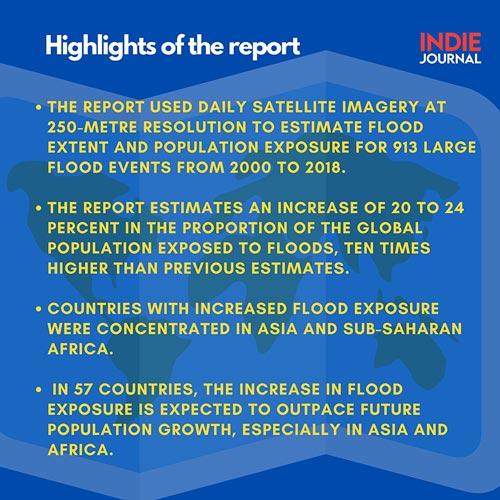 While we see more and more areas and people getting affected by the floods every year, a group of scientists have recently released a report stating that the proportion of the global population exposed to floods has increased by around 24 percent since the turn of the century. The report published by 'Nature Portfolio' used daily satellite imagery at 250-metre resolution to estimate food extent and population exposure for 913 large food events from 2000 to 2018. Considering the increasing number and intensity of the extreme rainfall and flood events happening across the country, experts have warned that India could bear the maximum brunt of extreme weather events and increasing floods. In fact, as per the above mentioned report, India was one of the countries where the increase in the proportion of flood-affected people is amongst the highest.

Since the last two months, and even before the monsoon began this year, several parts in India have been battling devastating floods and related events. Both of India’s coastlines were hit by intense cyclones in the month of May leading to floods and displacement in several states. The end of June saw flash floods and landslide activities in the states of Maharashtra, Goa, Madhya Pradesh, Chhattisgarh, West Bengal, Himachal Pradesh due to incessant rainfall. Since the beginning of the monsoon season, like every year, the states of Uttar Pradesh, Bihar and Uttarakhand too have been affected by floods.

"The impact of the report is definitely much severe in India. South Asian countries like India, China, Bangladesh, Pakistan have the largest population facing extreme weather."

As per the report, between 2000 and 2015, 58–86 million people, or 23–30 percent of the total population exposed, were newly residing in areas where inundation was observed at least once. The increase in the number of people residing in flood-prone areas did not happen uniformly across the world. Countries with increased flood exposure were concentrated in Asia and sub-Saharan Africa. The proportion of the population in inundated areas increased by more than 2 percent in 70 countries and by more than 20 percent in 40 countries. The report cites examples of Guwahati, India and Dhaka, Bangladesh as places with large population growth in observed inundation areas. 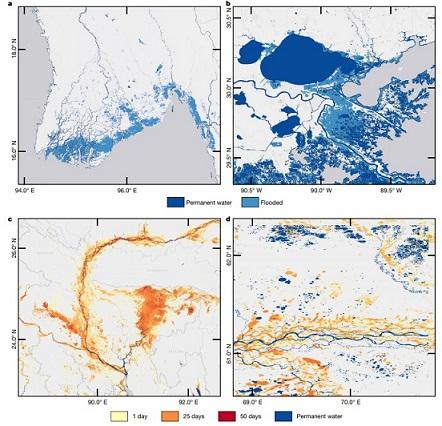 Why is this concerning?

The devastation that the world has seen this year could alone be a testimony to why the increasing number of people living in flood-prone areas is a matter of concern. Worldover, several countries including China, Indonesia, Germany, Belgium, the Netherlands, New Zealand have been ravaged by once-in-a-century kind floods this year. These floods have caused loss of lives, livelihoods and properties on a massive scale. Although advanced weather forecast technologies make it possible to save lives to some extent, the loss of property and livelihoods is almost inevitable.

For instance, this year, the state of Maharashtra was prepared for the impending floods in several districts in western Maharashtra. Flood management was planned in advance, people were trained for evacuation before the water crossed alarming levels. However, intense rainfall caused due to the formation of cloud trough over the western coast states of Goa, Karnataka and Maharashtra led to record rainfall. The flash floods that resulted gave no time for evacuation and people had to leave everything that they owned behind to save their lives.

“And this is not the first time. We have been facing extreme weather events almost every year for the last two decades. The economic loss resulting from these catastrophic events is huge too. And it’s not just the increase in the intense spells of rainfall that is a concern for India. We have also been seeing other kinds of extreme weather events too. The number of cyclonic storms affecting India’ coast has increased over the last decade. We have also been seeing more heatwaves. This makes the rise in the proportion of people moving in flood prone areas even riskier,” Koll says.

The report states that flood exposure trends are probably underestimated in rapidly urbanising countries because urban floods are underrepresented in the Global Flood Database. However, developmental activity is one of the major causes of floods in developing as well as developed countries. For instance, the recent floods in western Europe, especially Germany, have been attributed to development and concretisation in the region as well, as much as intensive rainfall.

In cities, the stormwater drainage is usually poor. Moreover, it is not designed for the intense spells of rains that we see now.

“In cities, the stormwater drainage is usually poor. Moreover, it is not designed for the intense spells of rains that we see now. Most cities in our country see both fluvial as well as pluvial floods,” urban flooding expert Sarang Yadwadkar said. Fluvial floods are caused when the levels of water bodies rise due to excessive rainfall. Pluvial floods are caused by surface runoff that is not absorbed into the ground.

“When we talk about urban flooding, we mostly talk about river flooding and encroachment in river basins. However, the encroachment upon aquifers and uncontrolled concretisation is equally responsible,” Yadwadkar added.

In India, Mumbai is definitely one of the most serious examples of urban flooding havoc. Every monsoon, Mumbai faces intensive floods. Increasing rainfall has made the city vulnerable to flooding more than just a couple of times each year. Encroachment on the city’s Mithi river, coastline, floodplains, marshes. mangroves have made it impossible for the surface water to run off, causing inundation. It displaces people, interrupts everyone’s livelihoods and causes damage to property and infrastructure.

“Here is where risk management comes in. Any future development that we do must be based on risk assessment. We need to assess future risks based on data, identify and map regions that are more prone to dangerous floods and accordingly plan development,” Koll said.

The report said that the global flood database generated from these observations will help to improve vulnerability assessments, the accuracy of global and local food models, the efficacy of adaptation interventions and our understanding of the interactions between land cover change, climate and foods.

“We cannot keep evacuating people when faced with floods each time. That can save lives at the most, not livelihoods. Observations have shown that instances of suicides increase after flood events. Loss of property in floods is much more than the loss of property in droughts. The expense for monitoring, forecasting and risk awareness would surely be lower than the economic losses incurred in a flood,” Koll added.

We cannot keep evacuating people when faced with floods each time. That can save lives at the most, not livelihoods.

Last June, India’s Ministry of Earth Sciences (MoES) published India’s first-ever assessment report on climate change. The report not only predicted an increase in the average temperature over the Indian subcontinent by 4.4 degrees Celsius but also projected the sea level in the Northern Indian Ocean (NIO) to rise by approximately 300 mm (30 cm). Some of India’s highly populated metropolitan cities and economic hubs like Mumbai and Chennai are located on the coasts and are already projected to submerge in large parts by 2050.

The UN’s Intergovernmental Panel on Climate Change (IPCC) yesterday released an assessment report on the planet’s future, which the UN has referred to as the code red for humanity. The report stated that the 1.5 deg C temperature goal of the Paris Agreement would likely be breached around 2030, a decade earlier than projected. The study also warns of increasingly extreme heatwaves, droughts and flooding.

“I believe there is no mitigation as far as floods are concerned. It is way too strong a force. What we can do is prevent them, prevent the damage. We can try and ensure that the floods are less severe so that those affected suffer less,” Yadwadkar added.

In 57 countries, the increase in flood exposure is expected to outpace future population growth, especially in Asia and Africa. The devastation caused by the floods is going to be more and more difficult to handle. Evacuating people each time and rehabilitating people after each disaster is not an easy task for any country, given the number of extreme weather events coming our way each year.

“Climate change is at our doorstep. But we haven’t done enough to deal with it. We think about it a lot, but we have not done enough at all. We are only thinking, but there is no action. It’s high time we start acting soon,” Koll said.