Living conditions of the houses in these slum areas have been poor and fearful for the past one year.

"After the flood destroyed our house last year, we took loans to rebuild it. But how are we supposed to live here in fear of our homes getting flooded every year?" questions Baby Ashok Pawar, resident of Tangewale Colony in Pune's Aranyeshwar area. Pawar has lived in there almost all her life, however, it's only since last year, she claims, that water has begun disrupting the lives of those living in the locality of around 80 houses.

Since last year, flash floods in Pune in the months of September and October have been severely affecting the slums across the city, which face severe inundation and loss of homes or belongings every time excessive rains lead to flooding of the city's nullahs and other water bodies. Living conditions of the houses in these slum areas have been poor and fearful for the past one year, as these people have been trying to get back on their feet amidst uncertain rains and the disruption caused by the Coronavirus pandemic and lockdowns.

"Encroachment and garbage and silt in Ambil Odha have led to its shallowing. Moreover, the housing society that was built in front of our colony has also blocked the free flow of water on the road. All the water thus gets accumulated in their parking, and then floods our homes when it overflows," another resident of Tangewale colony Prakash Sonawane told Indie Journal.

"Our clothes are wet and dirty, except for those we are wearing. Foodgrains, vegetables stored in the house are unusable. We have been cleaning our homes since morning, but we fear that another night of rains will again bring this same fate upon us. We have been living in fear," said resident Sanjay Shinde fighting his tears back while pointing at the condition of his house, which flooded for the second time this season due to the incessant rains of Wednesday night.

The slums in Dattawadi near Dandekar Bridge too are amongst areas where water flows down from the road or the water from Ambil Odha enters the homes of slum dwellers.

“We have been surveyed and assured homes by the Slum Rehabilitation Authority (SRA) for the last five-six years. However, we have not been given homes until now. Generations from our families have been living here, but it’s only since last year that we have begun facing the issue of flooding,” Bharati Sawant from Dattawadi 999 or Lalitadevi Slum in Dattawadi said.

In the Pandharkar Chawl in Akurdi, the uncertain and excessive rains of September-October have begun flooding houses since last year. In a relatively more planned city of Pimpri-Chinchwad, some of the residents of Chawl who have been living there for 10-15 years, said that the flooding problem has begun due to the constant road works in the city that leave no place for the water to go.

“On Wednesday night, rainwater began entering our house. At around 2 am, we called the fire brigade, but it did not arrive. We were awake the whole night, as the water could not be drained out of the house. Our home was filled with silt, mud and stink," said Ravindra Suryawanshi, a resident of the Chawl. Around 41 different spots in Pimpri-Chinchwad were inundated on Wednesday night. 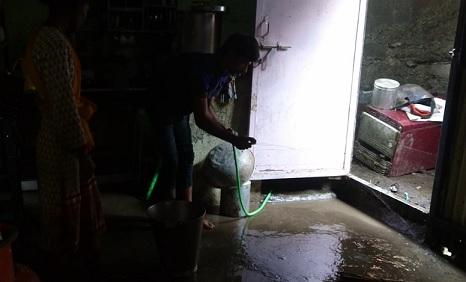 “In September this year, around a week before the anniversary of last year’s disaster, the Pune Municipal Corporation (PMC) put up a notice in our colony stating that the area might be at risk again this year, asking us to take our own precaution and evacuate whenever necessary. How can they do this? It’s been over a year that they have not provided us with an alternate housing facility. How dare they put up notices like that?” questioned Lata Pawar, daughter-in-law of Baby Pawar whose rebuilt house got flooded for the second year now.

The residents of Tangewale Colony have been demanding construction of homes for them in the same area for a year now. Most of the women in the area work as domestic maids in the housing societies nearby, due to which, they do not wish to shift to a different area. Most families have lived there for years, most people since their birth.

“They have finalised the area to construct a building for us under the SRA scheme. But I don’t think the work has begun yet. We don’t know how many times we would have to go through this until we finally get new homes,” Shinde said.

Indie Journal attempted to contact Additional Municipal Commissioner (Special) Shantanu Goel several times in this regard, however, he did not respond to any of the calls.

“The only solution to the problem of flash floods is opening up the nullahs and other water bodies in the city, and maintaining their natural topography,” says environmentalist Sarang Yadwadkar, who is also an expert on urban flooding.

With the changing patterns of rainfall, which are pretty much out of our hands, due to climate change and global warming, Yadwadkar adds that intense spells of rainfall in shorter periods of time are going to increase now.

He also points out that while authorities have been considering building a retaining wall by the Ambil Odha to solve the problem, that will not help as that will again lead to pluvial flooding due to the surface water run-off, which would not find its way to the water body.

“Deforestation on hilltops, hill cutting and soil capping are also amongst the reasons behind Pune’s flash floods. All these lead to an increase in the surface run-off from hills, due to which, flooding occurs very fast. This is especially disastrous in case of water bodies whose catchment area is in steep valleys, for instance, Ambil Odha gets water from the steep Katraj valley,” Yadwadkar explains.