Erratic monsoon, increased costs and declining prices of seed cotton have left the farmers in a lurch.

The Indian Government’s decision to import around 3 lakh bales of cotton has rendered cotton farmers agitated and afraid, that their cotton will sell at a much lower price than last year. In international markets last year, seed cotton fetched the cotton farmers in Maharashtra’s Vidarbha a good income. Anticipating similar gains this time as well, these farmers planned their crop. However, an erratic and unreliable monsoon, the increased cost of input and the declining price of seed cotton have left the farmers in a lurch, as they stare at inevitable losses.

“The decision to import cotton when so much cotton rests unsold with the farmers in the state is unjust,” says Vinay Mahajan, a cotton farmer from Isapur village in Wardha district.

Maharashtra Secretary of All India Kisan Sabha (AIKS) Ajit Nawale said that this year, the production of cotton in Maharashtra has declined by around 20-25 percent. However, experts said that this has not affected the availability of cotton in the market. In fact, farmers are asking why is the government importing cotton from Australia when the cotton from the farmers in the country is yet to be sold.

“Sowing and growing cotton is an expensive affair. If we cannot sell cotton at a good price, we cannot even recover the input cost. If the government imports cotton in such a situation, several farmers will have no choice but to starve to death,” says Deepak Khadse, cotton farmer from Kharola village in Yavatmal district in Vidarbha

On December 28, 2022, the government released a notification stating that it has allowed duty-free import of 51,419 MT Extra Long Staple (ELS) cotton from Australia under the Economic Cooperation and Trade Agreement (ECTA). The import duty on cotton, which was earlier 11 percent, was reduced to zero under this agreement.

“The price of cotton in the international market at the moment is quite good, which would be beneficial for Indian farmers. However, the decision to import cotton in such a situation could threaten their prospects. The quantity that they have imported will not immediately affect the demand and supply in the country. But the market prices of agricultural commodities depend greatly on perception. The import could cause panic amid farmers and traders will use the decision to compel the farmers here to sell their produce at a much lower price. This has happened before,” Nawale explains. 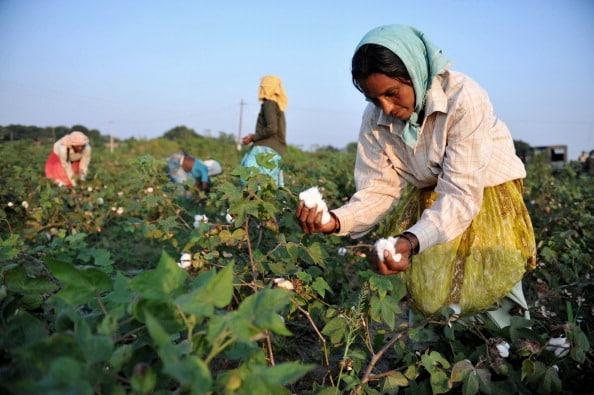 Experts have claimed the decline in the prices of seed cotton this year as opposed to the record prices last year has been a result of the pressure by the the textile industry on the government.

“It was not necessary to import cotton this year. But an artificial scarcity was created in order to facilitate the import to that the prices of cotton in the domestic market could be controlled by the stakeholders. Moreover, the permission for duty-free import has been extended till the end of this year, that is till December 2023. So this will affect the next cotton season as well,” Prof. Ghanashyam Darne of Savitri Jyotirao Samaj Shikshan Sanstha in Yavatmal said.

Experts claim the price decline of seed cotton is a result of the pressure by the the textile industry.

“The production of cotton in many cotton producing countries like Egypt fell drastically last year. So the demand in the international market rose and it benefitted Indian farmers. Farmers in Vidarbha sold seed cotton for around Rs 11,000-12,000 per quintal or more. Some even went upto Rs 13,000 per quintal. Farmers were not expecting prices like these, but it was assumed that they would earn at least Rs 10,000 per quintal. However, with the government’s decision, the prices will now remain under Rs 9,000 per quintal,” Darne adds.

The farmers had invested the input cost depending on the projection based on the cotton prices last year. Everyone spent free-handedly. In 2022, the area under cotton cultivation in Maharashtra increased by 7.68 per cent in Maharashtra (41.716 lakh ha). Unfortunately, the rains destroyed the yield this time, thus affecting the produce.

“However, farmers thought that since the produce was less, they will get a good price in the market. However, the import, which was clearly started because of pressure from the textile industry and the restrictions imposed on the futures market. No one knows what the price of the cotton will be tomorrow, or next week. This has severely affected the cotton prices,” Sudhir Bindu of Shetkari Sanghatana said.

On Friday, the price of cotton in Vidarbha stood at Rs 8,300-8,400 per quintal. “Three days ago, it was even worse at Rs 7,400-7,600,” says Vinay Mahajan, a cotton producer farmer from Isapur village in Wardha district said.

As per his estimates, while last year farmers produced around seven to eight quintals of seed cotton on average, this time around, the produce has come down to just three-four quintals.

“We have been seeing on the news that farmers are being accused of hoarding cotton. But that is not really the case, we are merely waiting for good prices in the market, so that we do not incur huge losses. Also, many cotton-growing farmers also grow Soybean. So they first sold soybean while they were getting a good price for it and saved cotton for later,” Mahajan added.

He further said, “The calculations of the prices are very tricky. Just the other day, we heard that some traders were offering Rs 8,800 per quintal, so many farmers took their produce out. Just a day later, the prices fell and the farmers who took the produce out will now have to sell it at a lower price. Also, everyone does not get the same price, as it depends of the quality of produce each farmer has to offer.”

However, he added that if the prices do not increase in the next few days, the farmers will have no choice but to sell at whatever price they get.

It is estimated that the farmers will lose at least Rs 2,000 to 2,500 per quintal this time. Experts are saying that on average, every farmer might lose around Rs 70 to 80 thousand at least.

The falling price is proving to be a last nail in the coffin for Vidarbha farmers who have already faced losses due to the extreme weather events and rising input costs this year.

Monsoon was not kind to Vidarbha farmers this year. After a delayed beginning, the rain poured down heavily after it arrived. Moreover, the post-monsoon rainfall in the month of October also wreaked havoc on the crops of Cotton, Soybean, that were ready for harvest.

“It did not rain for the first two months after sowing this year. This stunted the growth of the crop and thus production of the seed cotton lowered,” Khadse exasperated.

The post-monsoon rainfall especially affected the seed cotton balls in many parts of Vidarbha and Maharashtra, when rainfall lashed the districts of Yavatmal, Akola, Chandrapur, Buldhana, Beed, Latur, etc. in October 2022.

Khadse adds, “The rainfall in October destroyed the seed cotton balls that were ready for picking. If it comes in contact with water at such a time, its quality declines, so do the prices.”

Climate change has changed the pattern of monsoon in the state severely and farmers are among those most vulnerable to its impacts. The cotton farmers have faced the severe brunt of such extreme weather events this year.

A report by non-profit Genetic Resources Action International (GRAIN) and the Institute of Agriculture and Trade Policy revealed that there has been a 189 percent increase in costs for the key imported fertilisers in 2021, which is on course for a 288 percent increase in 2022.

"Every year, prices of seeds and ferrtilisers increase by 10 to 20 percent. However, the market prices of agricultual commodities do not correspond to this rise. So obviously, the farmer suffers," Darne said.

Reports reveal there has been a 189% increase in costs for the key imported fertilisers.

“The cost of seeds, fertilisers rose last year, adding to the already existing woes faced by the farmers. Farmers always have to buy seeds and fertlisers at higher prices. Moreover, the right kind of seeds and fertilisers are often inaccessible or unavailable in the market. The farmers often end up buying those in the black market. The information on the rising prices is also not available to the farmers easily or timely,” Bindu says.

Pointing towards the rising cost of farm labour required for picking cotton, he adds, “Labour cost for cotton picking was very high this year. Last year, as cotton was sold at a much higher price, the farmers paid around Rs 10 per kg per person for picking. A similar payment was promised this year as the price of cotton was projected to be high this time as well. However, with the decline in the prices, the farmers have found it difficult to pay the cotton picking labourers.”

Khadse also says that in and around his village, on average, farmers have been paying around Rs 300-400 per person per day, wherein they pick around 70 kgs of seed cotton.

“In Western Vidarbha, if a farmer cultivates cotton on 5 acres, he will grow tur on 1.5 acres at least. And the tur is not just grown here for household use. Almost 90 percent of the produce is brought to the market. However, climate change induced weather events have affected the cultivation of tur as well this year. The impact it caused was the worst in at least 25 years. Farmers have lost the crop that was ready for harvest,” Darne said.

Moreover, the winter season has also been unusual. “The relatively warmer winter and fog with a cloudy sky and lack of sunshine has affected whatever was left of tur and cotton in the fields,” he added.

Changing weather and declining production at increased costs is thus set to make things even grimmer for the farmers in the state. But is the government thinking about it?

“Government apathy has always been a problem for farmers. No government has been able to make a difference for them. Before the general elections of 2014, in the famous Chai Pe Charcha meeting in Yavatmal district, the present government had interacted with and promised the farmers of Vidarbha of doubling their income. On one hand, they make those promises, on the other hand, they take away the prospects of the farmers of making any profits. The double standards of the government hurt farmers the most,” Darne sighed.