In times of flood and disaster, Kolhapur's wireless man comes to the rescue

Since 1988, Kolhapur’s Nitin Ainapure has been working in radio communications after he got licensed for the same. While he is a licensed Ham Radio Operator and also deals in supplying equipment for the marine band (wireless network for fishermen), he also works with government administration before, during and after disasters, to conduct operations using wireless communication. Ainapure interacts with Indie Journal relaying his experiences of working during the disasters, and need for more volunteers trained in the nuances of Ham radio and wireless communications.

Last year, you and your team helped the Kolhapur District Administration with wireless communication during the flood. What was the nature of this help?

Nitin Ainapure: Last year, due to excessive rainfall, the sudden inflow of dam water and of course, the encroachments alongside the rivers, Kolhapur city and around 35-40 villages around were flooded. While the alert level for Panchganga river in Kolhapur is 39 feet, last year, it had reached up to 57 feet. The control rooms of the mobile towers are on ground, and we knew that the floods would certainly disrupt the mobile service. When I realised this, I sent one of my volunteers to Jyotiba hill, one of the higher points near Kolhapur, with my car that had the setup required for wireless communication. Some volunteers and I were stationed near Pune-Bangalore Highway, where we helped coordinate the transport of patients, medicines, food, LPG cylinders, etc. through water, from one end to another during the rescue and relief operation.

I had seen the 2005 floods in Kolhapur too, and I was a part of the rescue operations then, as the district administration believed in the utilisation of wireless communication. Even this time, we knew there was no other option. During any disaster and rescue, we certainly need wireless communication equipment and trained volunteers to monitor the operations from outside.

Were you prepared for a similar disaster this year? Did you have more help and support than last year, this time?

Nitin Ainapure: Yes, we have kept ourselves ready this year, in case disaster hits again. In fact, I think we are in a better position this time, as during the Coronavirus lockdown itself, I had set up a transmitter at the Jyotiba Hill and trained volunteers, just in case the communication disrupted. The volunteers are familiar with all the equipment as well as protocols and operations. They are now continuing their work through the rainfall as well.

I have around eight to 10 volunteers working with me. Apart from that, we have also trained over 40 officials from the District Administration who were trained in disaster management. Every district has such teams, and it would be better if they are equipped with wireless communication training as well. 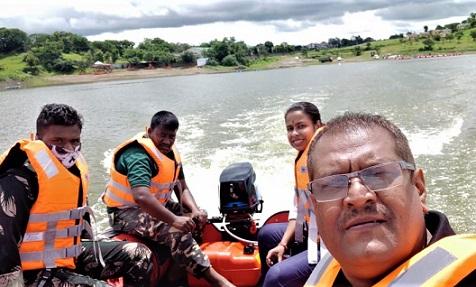 You also worked with a team of other Ham operators and wireless communication experts during Cyclone Nisarga, and helped convey messages even when the wireless antenna had collapsed. What was that experience like?

Nitin Ainapure: Before Cyclone Nisarga hit, Raigad District Collector asked some of the Ham Operators and wireless communication experts to help during the period. Likewise, we are stationed at different locations like Alibaug, Shrivardhan, and I was at Mahabaleshwar. Mahabaleshwar is a point from where we have more convenient access to Raigad and Konkan. It was not possible to transmit a message directly from Shriverdhan to Alibaug, so we had an automatic repeater set up in Mahabaleshwar, that helped transmit that message. We had fixed our antenna on top of a tower at the highest point in Mahabaleshwar.

However, during the cyclone, all the wireless antennas, including those of police collapsed. This meant that we would have to conduct manual repetition of messages between Shrivardhan and Alibaug, which can be risky and misleading in situations as grave as the one we were in. Manal repetition is also time-consuming, as understanding messages, and then conveying them ahead, while remembering the exact words, takes longer than auto repetition. So, we began recording the messages that came to us from one end and transmitting the recordings to the other. This way, we recorded and transmitted hundreds of messages that day.

We worked for five days after the cyclone when the mobile service was still disrupted. We helped in the rescue and relief operations. 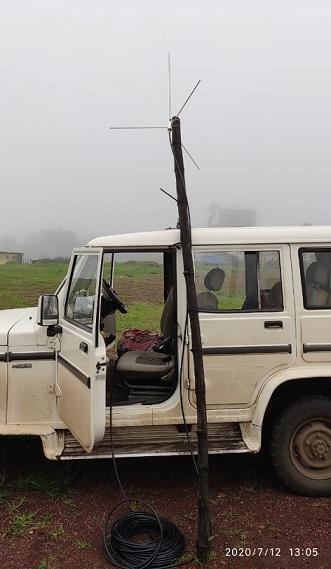 Considering the increasing number of floods and other calamities like cyclones, do you think we need to strengthen the wireless communication system in India, and also train more experts and volunteers? How could this awareness be raised?

Nitin Ainapure: For the last five years, I have been training volunteers in wireless communication in different districts. We need two types of volunteers. We need those who are good with communication, that is languages, and can help transmit messages efficiently. At the same time, we need technical experts who can set up the equipment, repair it if needed, etc. We need people with physical, mental and technical capability, wh when needed, can also climb up an 80 feet tall tower to set up an antenna there.

We certainly need more people to come and join us. There are over 30,000 licensed Ham operators in India, and out of these, hardly around 1,500 are involved in the communication daily. Wireless communication is not necessary only during or after a disaster, but it can also help prevent one. For instance, we were invited and helped establish convenient and efficient communication, during the anchor replacement programme at Sandhan Valley’s Baan Pinnacle, where the ring bolts used by the climbers were replaced earlier this year.

I appeal to people who might have some technical background in electronics with an urge to help people to join us in training programmes and help as volunteers in times of disasters.