Breast-feeding their children while being COVID-19 positive

“While I was put on various antibiotics, vitamins to tackle with COVID-19 infections, my baby who was also a patient was not given any of those medicines as she was exclusively breastfed. I believe that helped her recover faster, breast milk was her ultimate immunity-booster,” said Nikita Wable, a new mother from Mumbai. Wable and her baby, along with all her family members, had tested positive for Coronavirus Disease, through which, she continued to exclusively breastfeed her daughter with strict guidelines from doctors.

While getting infected with COVID-19 or coming in contact with the patients is stressful for everyone, it is even more so worrying for new mothers as being close to their babies and breastfeeding become challenging tasks. However, the World Health Organization (WHO), UNICEF, doctors and experts in neonatal care have insisted on an unhindered continuation of breastfeeding even for COVID infected or suspected mothers.

“It all started when I developed cough one night and then high fever the next day. I immediately isolated myself from my baby, holding her only while breastfeeding. The next day, my mother also got a fever, and that’s when we knew something was wrong. My mother, husband, baby and I, all tested positive for COVID-19, and on the first day, I was scared beyond anything for my baby. But my doctor advised me to continue to breastfeed saying that it will help her,” Wable said narrating her experience to Indie Journal.

As scared and worried she was, she nursed her baby while wearing masks, gloves and using sanitiser thoroughly before holding her. “My husband was asymptomatic, while my mother and I had symptoms like fever, cough, breathing difficulties. So the doctor advised that I should take the baby only while breastfeeding, and my husband should hold her otherwise,” Wable said.

After a period of 14 days, Wable and all her family members tested negative in the second test.

“Breastfeeding is particularly effective against infectious diseases because it strengthens the immune system by directly transferring antibodies from the mother. As with all confirmed or suspected COVID-19 cases, mothers with any symptoms who are breastfeeding or practising skin-to-skin contact should take precautions, WHO has stated.

Soundharya Kesan, a Chennai-based mother of a one-year-old, also had a similar experience, the only difference being that all her family members tested positive, excluding her and her baby.

“I live in a joint family of nine, seven of whom tested positive for COVID-19. Luckily, my son and I were healthy, but we took all the precautions in the home to prevent the spread of infection. And one important thing that I am thankful that I never stopped was breastfeeding my son,” Kesan said.

Kesan recalls that when her son had turned one this March, she was advised by many of her relatives to wean him off. “But I didn’t want to do that. Especially since the pandemic had already begun spreading so fast by then, I wanted to protect my son from any potential infection. I decided that my son needed this extra immunity, and continued to breastfeed,” she asserted.

Even after her family members tested positive, Kesan kept her home clean, prevented her son from touching most of what the others had touched, and wore a mask and gloves while handling him. “Most of my family members were asymptomatic, and they were constantly in close contact with my son before they were tested. I strongly believe that what helped him the most was the immunity that he had developed due to breast milk. He was exclusively breastfed for the first six months, and even later, I did not give him any formula. I recommend all new mothers to continue to breastfeed their babies, especially during this outbreak,” Kesan added. 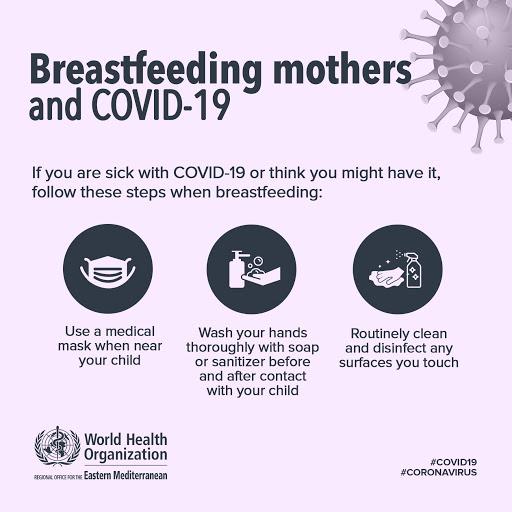 UNICEF has recommended 3Ws for mothers to ensure safe breastfeeding even when suspected of or positive for COVID-19.

Even if the mother is too sick to breastfeed, UNICEF has recommended that the milk could be expressed using a pump, and a non-infected member of the family could feed the baby using a clean cup or cup and spoon, of course with advice from the doctor.

Amidst the outbreak and lockdown, an Indian support group for nursing mothers ‘Breastfeeding Support for Indian Mothers’ (BSIM) has been giving guidance to new mothers including those who and their babies had tested positive for COVID-19 on how to continue breastfeeding through the disease. For the past seven years, BSIM has been supporting nursing mothers in various ways, with its reach all over India as well as abroad, mainly through its Facebook group.

BSIM Founder Adhunika Prakash said that she and the group members have been communicating to the breastfeeding mothers continuously, especially since the pandemic began. “We have had people coming to our platform saying that mothers and babies were separated as one of them tested positive, or that breastfeeding has stopped. That breast milk is every child’s right, and ultimately, it is going to help the baby sustain and fight the infection. So it should not be taken away from the baby,” Prakash added.