“This is permanent work. The government must accept that."

“The work that we do is as good as full-time work. It’s no temporary assignment, but a permanent scheme required to ensure the health of children, pregnant women and new mothers. Then why isn’t the government taking responsibility for the work?” was the question lingering on the minds of the Anganwadi Sevikas and Helpers in the state as they geared up for their protest against the Government, for the nth time, in their fight to be recognised as government employees.

The Anganwadi Karmachari Sanghatana (Maharashtra), in association with the Centre of Indian Trade Unions (CITU) and Akhil Bharatiya Anganwadi Sevika, Madatnis Federation, had organised a nationwide protest today, on October 1. The protest was timed a day before the 45th anniversary of the Integrated Child Development Services (ICDS) on October 2. “After years of struggle and protests, our remuneration has increased slightly. However, we are still far from being recognised as government employees. We are still honorary workers. No government projects or schemes could be completed without the participation of Anganwadi Workers. However, when it comes to paying them back, the government always backs out,” said a statement released by the Anganwadi Karmachari Sanghatana (Maharashtra). To date, Puducherry is the only place in India that has given Anganwadi workers the status of government workers.

The official work timing of the Anganwadi Sevikas is from 10 am to 3 pm. “However, we have to do so much more than our regular work, that we end up working for much longer,” says Ashabi Sheikh, an Anganwadi Sevika from Baramati. The primary work of Anganwadi Sevikas involves making children, between the age of zero to six years of age, school-ready. They are tasked with different aspects of early child care and nourishment as they track children’s height and weight and implement nutrition programmes for children, pregnant women and new mothers. Moreover, government surveys, vaccination programmes are all implemented with contributions from Anganwadi Sevikas and Helpers. 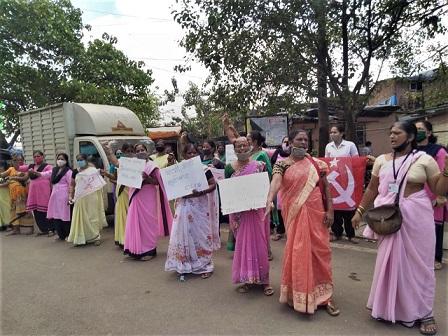 Anganwadi Sevikas are now paid Rs 8,500 per month, while Helpers are paid Rs 4,000 per month. “How is this amount ever going to be sufficient. We deserve much more. The government even wanted us to do the surveying for COVID-19 without any assurance like an insurance scheme that other government employees get. We were only going to get Rs 100 for covering 50 houses each day. We refused to work, but we still had to face a lot of pressure from our superiors,” narrates Varsha Tijare, Anganwadi Sevika from Chandrapur.

The pressure to work not only comes from superior officials but also from the Gram Sevaks. “After our organisation denied conducting COVID-related surveys, we even tried to do so. However, we had to do the work anyway. No matter whether an Anganwadi Sevika or Helper is pregnant or a new mother, or has any illnesses like diabetes, they have to do the work,” Sheikh says exasperatedly.

However, the fight of these women is not to escape from this work, but to get the returns and the respect that they deserve while doing it. Tijare explains, “We are already doing all this work, and we understand its importance. But we will be able to work with full dedication and satisfaction only when we get paid for it, right? Many of us are widows, divorcees, single mothers too. We all need money to run our households. Also, when the work we do involves risk, we need assurance that our families will be taken care of even if anything happens to us.”

Along with protesting for their rights, Anganwadi Sevikas also protested for the victim of the brutal rape in Uttar Pradesh, “We had asked everyone to gather wherever possible, even if their number is small. Along with our cause, we also used our platform to raise our voices for justice to the Hathras rape victim and her family,” Shamim says.