A year from the abrogation of article 370, a collective report breaks the silence on Kashmir

This report documents the changes taking place on the political, legal, policy and economic sphere since August 2019.

“What we felt on August 5, that is something inexpressible, unnarratable and unspeakable. We did not understand how we were abruptly cut off from life...cut off from the whole world and around us, there is a huge deluge,” said Prof. Hameeda Nayeem as she spoke about how events unfolded on this day, exactly one year ago.

On August 5, 2019, the voices of the people from Jammu and Kashmir were suddenly cut off from the world as the BJP-ruled Central Government passed the bill to abrogate Article 370 of the Constitution of India, that gave special status to the state and bifurcated the state into two union territories. One year later, when people in Kashmir still face restricted access to internet and movement, Kashmir Reading Room (KRR), a collective of working professionals, has released a report ‘(Dis)Integration at Gunpoint’. On the eve of the day that changed the identity of Jammu and Kashmir, the report was launched by South Asia Solidarity Group in London in the virtual presence of Prof. Hameeda Nayeem, Independent filmmaker Sanjay Kak and Human Rights lawyer Parvez Imroz.

This report documents the changes taking place on the political, legal, policy and economic sphere since August 2019. 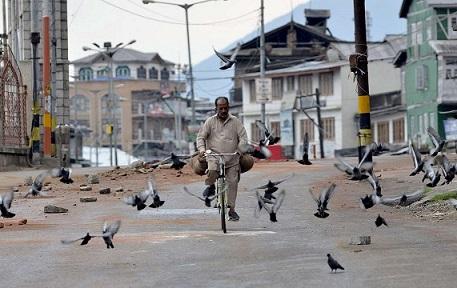 “We thought it was war. All communication was cut off. Our existence was in a way taken from us. It was as if we were all put in Noah’s ark. When his family was put in the ark, it was to save them. When we were put into this situation, it was to put us in the process of dying,” Nayeem said while speaking at the launch saying that the report is the first draft of the history of the last one year but it goes much beyond that.

“This online silencing and invisibilising, started out as a government’s collective policing to curb all manner of expression, including expectations of protest/resistance, is digital punishment in the extreme,” writes Geeta Seshu in her article in the yearly report, KRR tweeted a day prior to the release of the report.

The report covers recent changes in Domicile law, amendments of laws affecting the transfer of state land to non-state subjects and corporate entities and mining rights. It also covers developments in Constitutional Courts concerning the amendment to Article 370, treatment of PSA petitions, Habeas Corpus litigation and media petitions in the last year. The report also includes perspectives from minorities and voices from - Ladakh, Jammu, and the Kashmir valley.

Additionally, it provides an overview of the human rights violations, curbs on freedom of the press, repression of Kashmiri journalists and disenfranchisement of Kashmiris that is still underway. Different contributors have boldly written about several issues that have grasped the bifurcated state in the past one year, may it be apathy of the Supreme Court, loss of land and property, forced homelessness, post-abrogation environmental concerns or the expansionist propaganda if Hindu Rashtra.

"Our newspapers have been completely controlled. They give you what is cut and pasted from the government information department. Nobody is allowed to speak." Prof @HameedaNayeem during @kreadingroom #KRRYearlyReport

“It’s clearer than ever before that when it comes to J&K and its people, Indian courts find their hands tied by the binding precedents of delay, evasion, abdication, and justification," reads an excerpt from one of the articles of the report by contributors Gayathri Devi KT and Sameer Rahid Bhat, shared by the KRR on Twitter.

“Judiciary is complicit by their omissions in not taking measures to protect human rights. They have failed. Except a few who had the audacity to confront the state,” Imroz said. He further questioned, “How long will India control the people of Kashmir? Ultimately there is Newton's law. There will be a reaction.”

Another excerpt from an article by Swathi Seshadri in the report states, “Amarnath Yatra is conducted under the shadow of the army. In addition to the massive presence of the forces in the valley, 30,000+  are deployed along the route. Local economies do not benefit from the Yatra as it clashes with the regular tourism season.” Speaking over the same, Kak said during the launch, “However, if you say this Yatra is destroying the landscape, causing inconvenience to people. It is seen as a Hindu phobic reaction. It is a product of a cruel and effective mind.”

He also added, “The KRR Report looks at (it) in a comprehensive way of the undivided Jammu & Kashmir, but they are also considering Gilgit, Baltistan and Ladakh. There is an excellent chapter on minorities in Kashmir which most people don't talk about. Moving beyond Kashmiri Pandits (KP) and also speaking about Kashmiri Sikhs and Shias.”.

Hours before the anniversary of the abrogation began, curfew was imposed in Jammu and Kashmir to curb the potential ‘black day curfew’.

“Kashmir is in search of a political settlement which is not possible without the effective and active engagement of all regions of the former state of J&K along with other stakeholders and the international community,” another excerpt from an article by Amina Mahmood Mir in the report stated. Is that dialogue ever going to happen? That is a question unanswered even 365 days later.

The report can be accessed here.